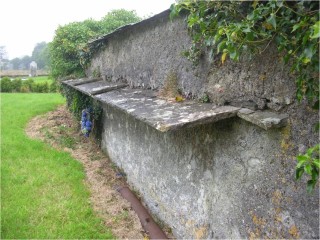 Simple stone shelters such as this are a relatively common feature to be found in churchyards. They are especially common at Church of Ireland parish church sites where they were used to protect the ladder, used to maintain the roof and gutters of the church. Many of the Galway examples comprise of an angled roof of Liscannor slate such as the example shown here. Iron brackets are part of the feature. The ladder was hung on  these brackets. During the medieval period the parish was responsible for the upkeep of the main body of the church while the clergy were responsible for the chancel area. The workings of the Select Vestry of the Church of Ireland in many ways is the closest in how it works to the medieval system.