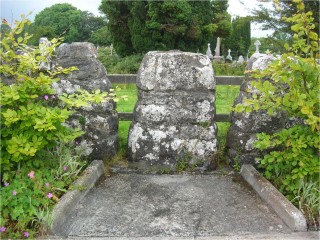 Coffin rests occur at or near some historic graveyards. They were used as a form of style at which to rest a coffin. They generally have two opening sometimes three through which the bearers could access the graveyard. The the coffin would be laid down on the rest and picked up again by a different group of bearers who would take it the rest of the way to the graveside. No thorough survey has been undertaken of these enigmatic features. Sadly many have been lost to poorly advised restoration works undertaken to graveyard walls.