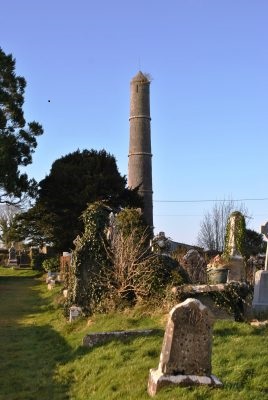 Consists of an elaborate replica of a round tower constructed in Killeroran graveyard near Ballygar by Denis Henry Kelly a local landlord as his funerary monument. A limestone plaque with an Irish inscription informs us of the details of his family’s pedigree and bears the crest of the O’Kelly clan, comprised of an Enfield. The tower is based on an early Christian Irish round tower. As well as being a funerary monument for the family it also functions as large eye-catcher or folly on the landscape.