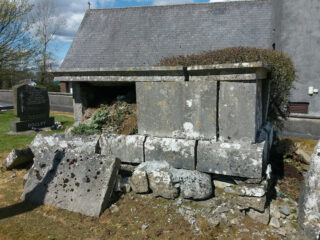 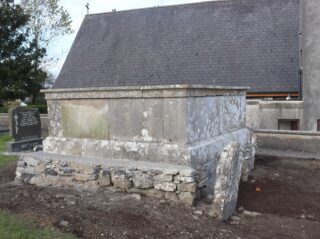 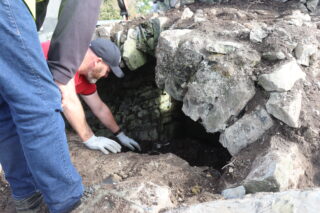 Exposed vault during works
B. Doherty 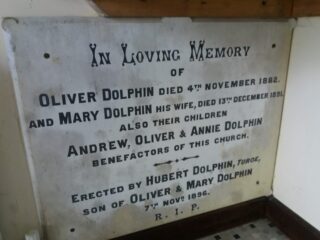 Galway County Council procured the services of Howley Hayes Architects to manage conservation works at the Dolphin Tomb, Bullaun, Loughrea. Funding was approved from the National Monuments Service, Department of Housing, local Government and Heritage under the Community Monuments Fund 2021. The chest tomb is located within Bullaun Graveyard, which is a Recorded Monument GA097:029 .

Local stone masons Stankard Stone, Structural Engineer Kerrill Lyndsy of Kinvara Consult and Archaeologist Dominic Delaney were engaged to prepare a method statement, scope of works and strategy in conserving and restoring the monument. Carra Plant Hire and MKO Ltd also provided their services which incorporated an initial ecological assessment, removal of ivy, disassembling the tomb, re-aligning the base structure and inserting supports. Archaeological monitoring and consultation was carried out throughout the process. The structure was re-assembled using the same masonry and traditional methods.

The Dolphin family were of Anglo-Norman origin and held their lands under the de Burgh Lords of Connacht and Earls of Ulster from the thirteenth century. John Dolfyn was a tenant of Galboley and Rathgorgin before 1251 in de Burgh’s demesne cantred of Maenmagh. When Richard de Burgh came into his inheritance in 1280 as Earl of Ulster and Lord of Connacht, John Dolfyn was still holding Rathgorgin and Galboley (Burke, D 2013). Their descendants stayed within the area, and memorials to other family members are located within The Abbey, Loughrea.

The Dolphin chest tomb contributes to the cultural and historical significance of Bullaun graveyard. A memorial is located inside the church porch which was moved to its current location from an earlier church. The local community are delighted with the progress. What was once an eye-sore is now a feature to be appreciated and highlighted.