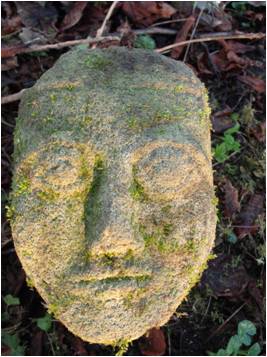 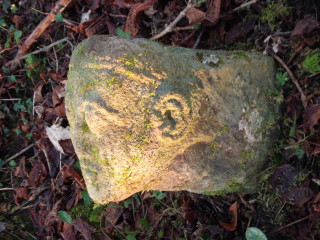 This highly ornate medieval carved head was located in a small graveyard near Balllynagar House, Woodford named Cuilleendaegh. Sadly it was illegally removed from the site about two years ago. The head was fixed into the soil by means of a long stone spur originally used to fix it in place in its original context in the church from which it originated. It is a well carved head with well formed lentoid eyes and a near perfect nose. The ears are very well executed. A band of ornament across the forehead either marks the hairline or else a cap. Prior to being fixed into the ground this carving formed the apex of a nearby structure function oing as a finial. This writer believes that it may have originally have come from Kilnalahan Friary just a few miles away. It seems too elaborate to have formed part of a local church. numerous other fragments of of dressed and carved masonry of various dates also occur in the site all of which suggests that material was imported here from elsewhere. The transplanted Aylward family had a small chapel here it is thought, and the site also contained a Lady Well and later children’s burial ground. A hermit named Edmond Mullins lived here, his headstone records his death as 1806. He may have adorned the site with material removed from Kinaleghin Franciscan Friary in Abbey. An informative sketch of the structure in which this head was incorporated is shown in a volume of the Journal of the Society for the Preservation of Memorials to Dead.