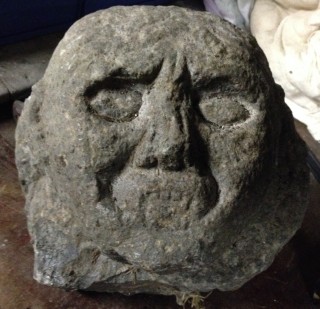 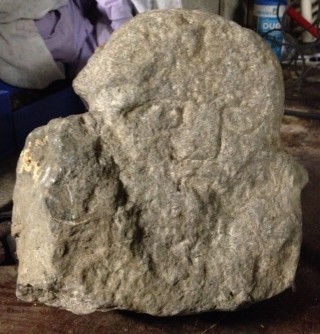 The Abbeygormican Head was discovered by FAS workers undertaking wall building on a roadside adjacent to Abbeygromican Augustinian Abbey in the 1990s.  The head consists of a two-faces, the main carving is executed in relief on the front of the stone, with a secondary face on the upper flat face of the stone. This semi-jani figure may in fact not have been carved to be such, but rather the upper incised face carved as a practice piece. The relief face is grotesque in appearance, with its tongue appearing to hang from its mouth. The teeth are exposed and the brow is heavily furrowed and striation occurs to the face. The ears and eyes are also quite strong in their presentation. The eyes are large. The upper face is simpler consisting of an incised outline. It is possible that this face particular part of the stone supported a timber beam as the fragment seems to have been used as a corbel. The work appears late medieval in date. Thanks to Michael Mullery FAS Supervisor for bringing this carving to our notice. It is currently in the possession of the community Archaeologist.