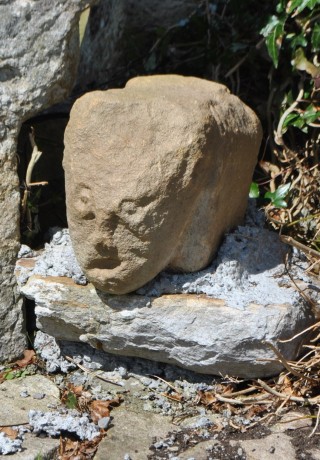 This small carved sandstone head is of medieval date. It was set on the same plinth as the large 12th-century cross but has since been removed by the community and placed in storage for safety. Due to its angular form it appears to have been a decorative stop or label from a window or door. The well defined eyes are small and round and set into larger circular depressions or sockets. The mouth has a slight upwards twist on its left side and is well defined. The ears are also well defined though worn. The head is quite small in stature. It is though that this head was discovered in Carrowntomush graveyard originally, (locally known as Addergoole graveyard) but had been kept in Dunmore for safety. Some other material from the medieval church such as blocks of well shaped masonry can still be identified on the site.