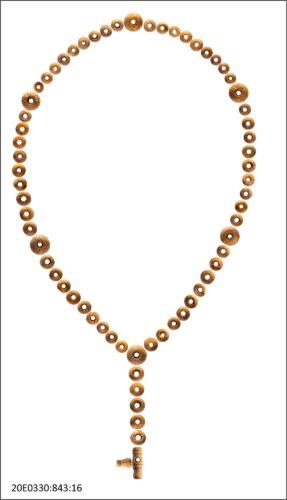 Archaeologists from Atlantic Archaeology excavated human remains separated by approximately a thousand years at two different locations in Ballinasloe, Co. Galway. The upgrade work for this area was carried out as part of the Water Services Infrastructure Upgrade and Town Enhancement Scheme (TES) in Ballinasloe, Co. Galway. One of the burials was accompanied by a rare bone paternoster or set of rosary beads.

The earliest remains were found by archaeologists Nuala Hiney and Angela Wallace during site investigation works in St. Joseph’s Place on the western side of the town in 2011. Radiocarbon dated to between the 6th and 7th centuries AD, they are associated with the site of a church and cemetery levelled during the construction of the housing estate in the 1950s. As such, the dates confirm the presence of a religious community in the area during the early medieval period (400-800AD).

In May 2020, a small cemetery was discovered in Society Street by archaeologist Fiona Maguire who is a native of Ballinasloe. Although this area was quite disturbed by modern services, the skeletal remains of at least 10 individuals, both adults and children, were identified. A remarkably well-preserved set of rosary beads or paternoster, consisting of 67 bone beads, was found around the foot and lower leg of one of the adult skeletons. This burial was identified as female aged between 35-44 years and was dated to 1477-1638 AD.  The associated find of paternoster rosary beads are between 400-500 years old. A well was also found next to the burials, which lies preserved below the renovated footpath.

This two-year project was undertaken by SIAC in conjunction with Ryan Hanley Consultant Engineers on behalf of Irish Water and Galway County Council. During the archaeological monitoring of the upgrade works some interesting artefacts and structural remains were uncovered. They included a trade token and coin (dating to the 17th century) as well as the foundations of Market House (built 1750-1850) in St. Michael’s Square. Correspondingly, the scale of engineering work involved in the design of the early town was reflected in the preservation of cut stone culverts, cast iron gas, water and sewage pipes and a clay levelling layer under some of the streets.

The discoveries revealed  during this project contribute significantly to the understanding of the early history of Ballinasloe and its people. It is hoped that they will also contribute to the development of a heritage plan for this important and very old market town.