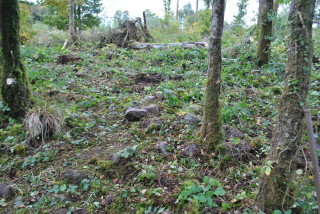 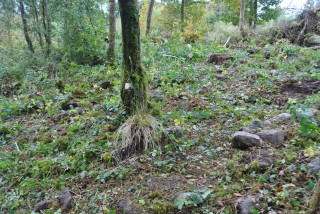 The much anticipated “Bullseye Wood Project” was launched at 4.00pm on Wednesday 26th August as an initiative of Galway Community Archaeology Advisory Project in partnership with Woodford Development Group. The project will involve the sensitive cleaning of a small Children’s Burial Ground within woodland and recording it as a community archaeology training programme. It is the aim of this Project to have the site included in the Heritage Council’s Adopt-a-Monument Scheme, a new initiative, that originates in Scotland, whereby the local community will be involved long-term in its management and maintenance. It is also planned to create a green walkway around the site as a local amenity so that the archaeology, ecology  and the recreational potential of the cleared woodland can be combined and made accessible to all. The initial call to the Council to have something done about this little graveyard came from Mrs Helena Carty who had been carefully tending to the site and its little graves for years. The launch occurred on Wednesday 26th of August at 4pm at the site. Mike Shiel spoke on behalf of Galway County Council the owners of the property. The project was officially launched by Senator Lorraine Higgins. Refreshments were served in the Heritage Centre after the event.