A site of popular devotion in the Slieve Aughty's. 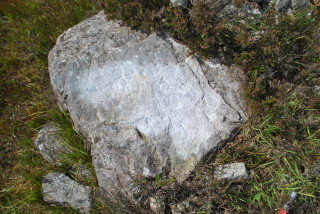 Among the large number of interesting archaeological features recorded by the Field  Monument Advisor during fieldwork in the Slieve Aughty uplands, this surprising sandstone boulder located in Loughatorick South is to me one of the most intriguing. It consists of a flat boulder, set on a slope of ground on the side of a hill, overlooking a wide valley. A small crude cairn of stones erected beside the boulder was constructed to identify its position in the landscape.

Conversations with local people in relation to the possible presence of unrecorded archaeology in the townland alluded to this stone. It was initially described by one person as a sapper’s stone. However, a similar conversation with another person described it as a stone with writing and a cross on it. As it happens both observations were correct, as it has a lead plug in its centre, providing evidence of its use as a surveyor’s ordnance datum point. But by far the most interesting aspect is its former use as a site of localised popular religious devotion. Sacred stones such as this were often used as popular worship sites during the Penal era. Many were named, generally called after a local or one of the major national saints such as Patrick or Brigid. This stone, however, does not bear a dedication, nor does it appear to be of penal date.

The sacred stone is inscribed with a combination of three thematic elements consisting of a short prayer, an IHS monogram and a small plain cross. The cross is a crudely cut equal armed object. The prayer is also simple, and reads; ‘Pray to God’. The sacred IHS monogram has flat t-shaped terminals. Unlike many IHS monograms, this one is devoid of a cross, a symbol typically shown springing from the cross-bar of the H. The work appears to have been executed by a local person with a series of simple chisel cuts.

The style of lettering and general form of the cross confirms that it is post medieval in origin, probably of a 19th or early 20th-century date.  Local tradition holds that it was carved by a devout man who once lived in the townland. It has no, known, saintly association or particular cures related to it. It does however, appear to post date the Ordnance Survey, as it is not noted in either the field books or annotated on the original 1840s map. It is very probable that if a stone of religious significance was reused by the sappers, that it would be noted by them in the survey.

Its documentation here is due to it being indicated to the writer by members of the local community. Local knowledge is one of the key factors in identifying hidden cultural features of this kind.  Other sites associated with popular religious devotion have also been recorded during fieldwork. For example, a mass rock and former chapel site in Loughatorick North, a children’s burial ground in Toorleitra, a bullaun stone, known as St Patricks Stone in Derryoober West, a series of stones in Looscaun also dedicated to St Patrick, one of which forms a saint’s chair and bears an inscription, and the site of a former chapel in Clonco townland. This latter feature is noted on the first edition OS map but prior to fieldwork was not identified on the ground.

These sites are additional to a large number of popular religious sites recorded on the RMP including a number of children’s burial grounds and holy wells.  Also of interest is how sites of this type are still evolving. An example of this phenomenon is a disused lime kiln on the side of a road in Derryoober which has been converted into a Marian shrine by members of the local community. It shows how popular personal belief and religious devotion has shaped the development of such sites.