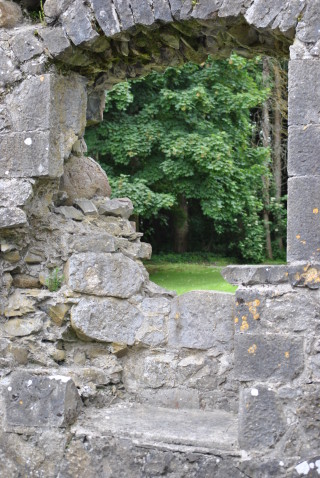 While the friars were eating their meal in the refectory one of their members read a chapter from the rule or some religious text. He sat at a special desk. In this instance the Reader’s Desk is incorporated into the larger of the three windows in the north wall of the refectory. Its location in the window embrasure took advantage of the natural light. The stone desk upon which he rested his book though never mentioned in any published material, is evident in the fabric of the window, but is quite damaged. The back of the seat survives as recognisable curve in the window splay to accommodate the reader. However, the actual seat itself upon which the reader rested is lost. It was also likely to have been made from a stone slab.