You are here: Home>Archaeology>Castles>Longford Castle 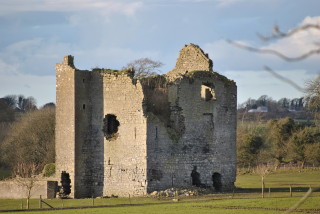 Longford Castle gives its name to the Barony of Longford, which is coterminous with the ancient territory of Síl Anmchadha controlled by the native O’Madden’s. This early castle, dating to the fifteenth-century, has a double barrel vault on the ground floor. The attached photograph clearly shows a line of later building above the level of the narrow arrows slits. A well carved piscina reused in a secondary position and mounted on its side into the wall of a small ante-chamber suggests that this castle may have had its own private chapel at one time. Longford Castle functioned as the caput or major residence of the O’Maddens at one stage in its history. It is built on an Esker therefore likely to have controlled an important medieval routeway culminating at a ford on the River Shannon known as White’s Ford. Tiranascragh medieval parish church further east on the same stretch of esker is also on this routeway.