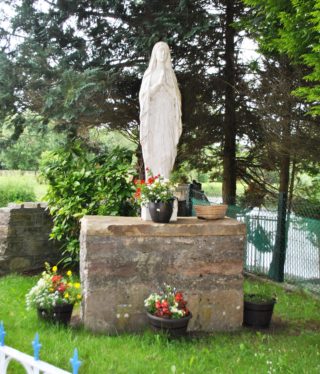 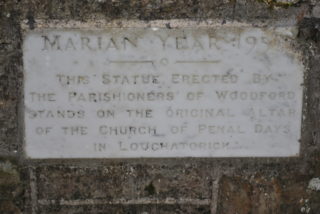 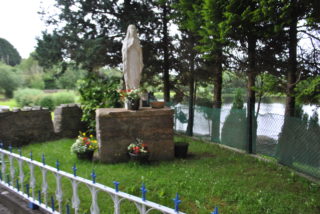 General view of the Marian Shrine with The Bay in the background.
Christy Cunniffe

A white marble statue of the Virgin Mary was erected beside ‘The Bay’ in Woodford in 1954 as a Marian Shrine to mark the celebration of the Marian Year. It is mounted on a plinth and rests on a stout sandstone slab that originally functioned as the altar in Loughtorick Penal Chapel. A new Mass Rock was erected to replace the altar by the people of Loughtorick at which an annual mass is said on the 15th of August. Monuments such as this are of great devotional and cultural interest.

A white marble plaque in the wall beside the shrine bears the inscription:

This statue erected by the parishioners of Woodford stands on the original Altar of the Church of Penal Day in Loughatorick.