Human figure pecked by a pair of affronted birds 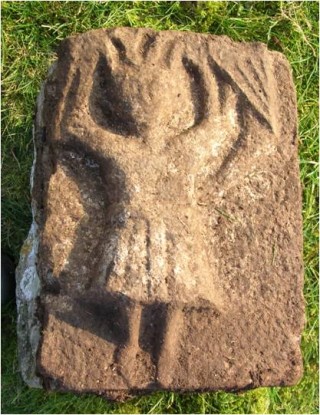 This interesting example of late medieval carving in Grange graveyard near New Inn, Co. Galway depicts a human figure dressed in a kirtle being pecked on the head by a pair of bird-like beasts. The photograph shows the the right wing of the bird and a pair of beaks pecking the head. Used as a makeshift gravemarker, it likely came from an ornate late medieval doorway or perhaps a chancel arch. High status carving of this type is found in Clontuskert, Clonfert, Kilconnell and a number of other ecclesiastical sites in the Diocese of Clonfert, and can probably be ascribed to the mason Johannes whose signature appears at Portumna Priory and Clontuskert Abbey. Only a small section of Grange church survives intact. However, a large collection of architectural fragments are to be found in the graveyard used as gravemarkers. They provide vital information about the form and type of fenestration originally in the building. A number of sections of door jambs survive. Grange functioned as a grange of Boyle Abbey in Co, Roscommon but was under the control of the native O’ Kellys in the fifteenth century.