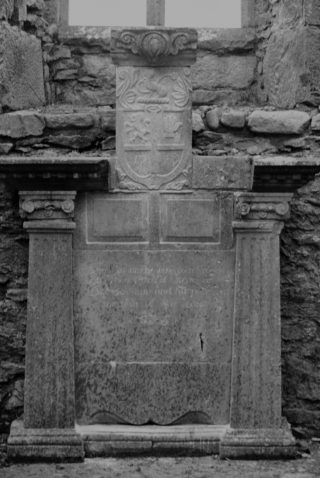 Burke wall tomb. This tomb has obviously reassembled. some pf the decorative stonework form the top is missing. The rest was put together in a slightly jumbled fashion.
Christy Cunniffe 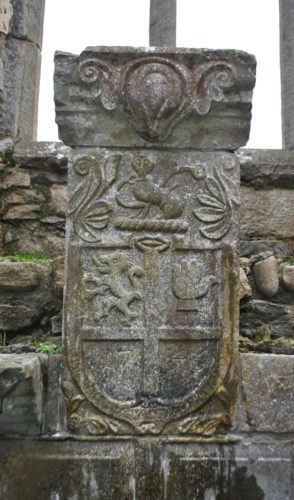 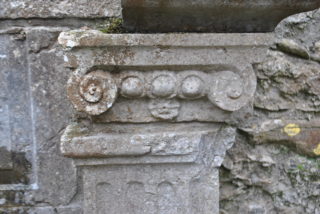 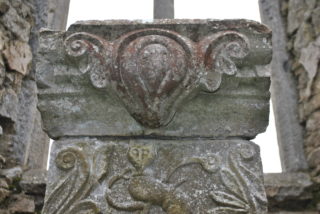 Decorative element on the top section of the tomb.
Christy Cunniffe 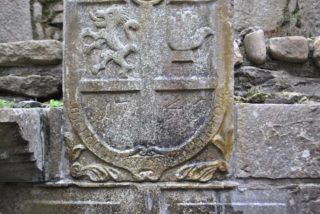 The John Burke of Reaghan wall tomb in the roofless side chapel of Abbey Franciscan friary is situated under the window in the south wall. The tomb comprises of a composite classically designed tomb with the Burke Coat of Arms and Crest on top. It rests on a limestone slab with a moulded edge which appears to be a reused altar top or mensa. Reaghan is a townland in Tynagh civil and modern parish.

The Burke Arms are:

The following short inscription is incised on a panel on the lower section of the tomb.

The tomb seems to have been reassembled at some stage in its history and is missing part of its entablature. This is dressed in a classical dentil ornament. A pair of Corinthian pilasters form a frame at the sides.