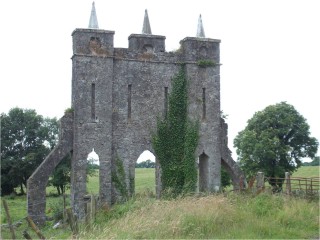 Eye catcher or folly in Gothic Revival in Belview, Laurencetown. This is one of a number of ornamental features constructed on the Lawrence Estate in the 18th and 19th century. It is thought that this feature may have functioned as the front of a small house or lodge similar to another example also on this former avenue to Lisreaghan or Belview House.