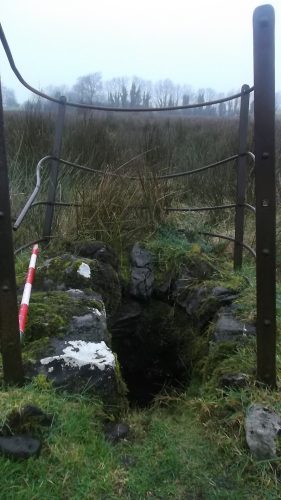 Recorded Monument GA086:149  ‘Tobair Laan’, or Saint Laan’s Well  is located in a field to the north east of Killaan Church and another well known as St. Killaan’s Holy Well. This well is marked on the 1st edition OS map. During the archaeological survey carried out in 1985 the well was described as ‘D’ shaped in ground plan and surrounded by a line of drystone walling reaching an average height of 15cm. A modern iron railing is built on the top of the wall.[i] A stream clearly visible beside the well on the 1840s map has become overgrown and is now barely discernible in the landscape. A shore that linked the well to the stream is identified by the presence of a box-like opening in the enclosing wall. Local information recalls its use as a domestic well. The water is made accessible by a series of steps.

Who was Saint Laan?

There are a number of spellings for the name. Laebhan, Leban, Liban, Loebhain, Leaain. The earliest reference to this saint is from the Annals of the Four Masters under AD448. St. Laebhan was a smith to St. Patrick. William Reeves notes that in the recital of St. Patrick’s muintir or family…there occur the names of three smiths expert at shaping; MacCecht, Laebhan and Fortchern.

The aforementioned smith to Saint Patrick, Maccectus of Domhnach Loebain or Church of Laan, reportedly made a relic known as the finnfaidheach. O’Donovan notes the relic was lost through time and states he ‘never met any authority to prove what it was. However, ‘Mr. Petrie thinks it was a bell’. Could it be the famous bell of St. Patrick?. This is currently in the care of National Museum of Ireland.