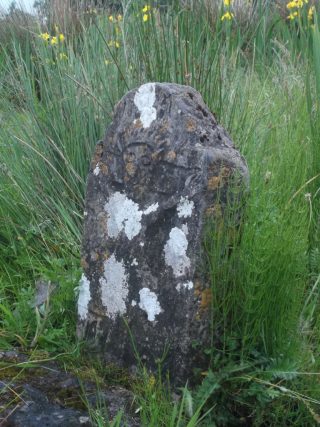 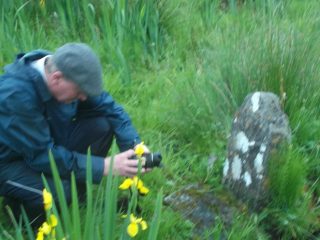 Tobair Maolle is located in the townland of Kinreask. The well is located in marshland, and at the time of our visit (June 2013) was surrounded by flaggers (a yellow wild orchid). This is a natural spring, marked by a stone slab with a depiction of the crucifix. A date 1762 is carved onto it.

The site is located close to the boundary of townlands Kinreask, Keave/Cave, Corskeagh and Garrymore. Wells have been meeting points for centuries; locations for trade, pagan and then later christian worship. Water is a symbol for cleansing, a source of sustenance and a necessity for life. Patterns were gatherings for Christian worship, which were stopped by the church due to alcohol consumption and the tendency for fights to erupt.

Local man Sean Griffin remembers stations being carried out here when he was younger. He recalls up to twenty people walking around the well ‘doing stations of the cross’. They pulled ‘flaggers’ as they did so, possibly to count the decades of the rosary, and lay them down in a heap by the crucifix.  The stations took place on the 29th June, the feast of Saints Peter & Paul, who are the patrons of the Parish of Ballymacward.

Maolle may be a derivitive of Malachy;  Maolrnhaodhog ua Morgair was born in 1095 and is patron saint of miracle prayer. There is a story that a child once fell into the well at Kinreask and was cured from blindness.