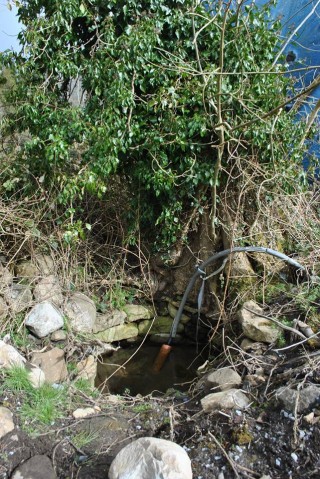 St Patrick’s Well in Drimkeary, Ballinakill (South East Galway) was until yesterday lost to local memory in many ways. A lucky visit to Christy Bruton and his wife in Drim led to an interesting piece of detective work using their OS farm maps, combined with critical information contained in the Schools Folklore Collection. After having checked out the position of every well in the area from the maps, Christy decided that we should take a drive as far as Drimkeary townland, where he knew the family mentioned in the folklore once lived. We arrived at the home of Laura Burton, who, when she arrived back, was delighted and did not appear to be too disturbed by two strange characters peering into the domestic well at her gate. She asked us to wait for a minute, and she took off up the road in her car to fetch Mrs Patricia Power, her neighbour aged 85, to see if she could confirm if this was indeed St Patrick’s Well as we thought. Exactly as we had expected Mrs Power said when she was a young woman she used to visit the well 3 or 4 times a day for buckets of water, and that it was always known as a Sacred Well. She also said she remembered seeing ‘cloths’ tied on the large ash tree that overhung the well. The case was resolved to my satisfaction.
Now we have to find the rocks that were noted in the folklore as being nearby that bear the tracks of St Patrick’s knees.
The ash tree survives today as a large stump. The main part of the tree was damaged in a storm some time ago. The well consist of a circular drystone construction standing to about four course in height. and 4′ in diameter. The water rises from an active spring with an overflow culvert provided in the side of the well to take the surplus water away. Well done to all concerned.