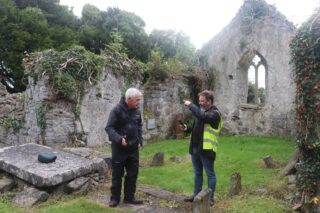 Discussion at Kilboght
B. Doherty 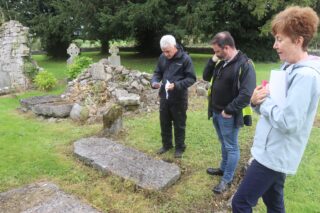 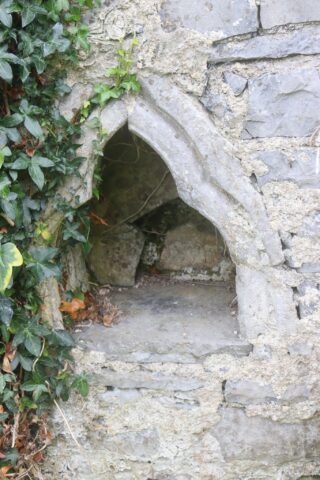 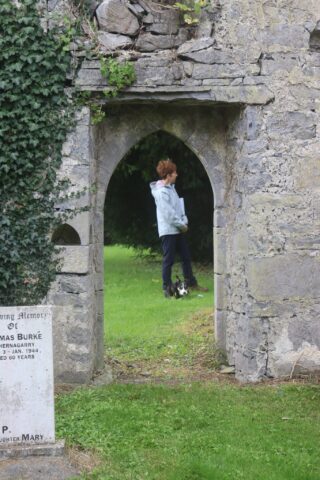 Doorway with water font
B. Doherty

A multidisciplinary team including a Conservation Architect, Structural Engineer, Archaeologist and Ecologist contributed to the plan in consultation with the graveyard committee, locals and Galway County Council. Peggy Doherty was instrumental in preparing the application, contributing local knowledge and expertise in the history of the site. A drone survey of the site was also carried out to assist is identifying associated sites in the area as well as assessing the structure from above.

The Conservation management Plan shall be used to inform the local committee, Galway County Council and the National Monuments Service on future conservation works. Although it is not widely known about, this site is of great archaeological and architectural importance and a major contributor to the ecclesiastical heritage of the County of Galway.

Saint Richella was reputed to have been a ‘Sister’ or contemporary of Saint Patrick and he founded the church here in her name. The name Cill Bocht, when literally translated means ‘Church of the Poor’. Kilreekil when translated literally means Church of Richella. The curved extent of the site to the north may represent the remnants of an Early Christian enclosure.

Kilboght church and graveyard is a recorded monument (GA098-111).  Located on a hillock in gently undulating pastureland and occupying the E half of an associated graveyard (GA098-111001-). By 1563 it was occupied by Franciscan monks (Gwynn and Hadcock 1970, 271). What survives is a multiphase medieval church, in fair condition, consisting of a rectangular nave (21.8m E-W; 6.25m N-S) with a S transept (7.7m N-S; 5.6m E-W). (NMS Files, accessed via www.archaeology.ie)  Architectural features at the site include a piscina, a water font and two medieval grave slabs within the nave.