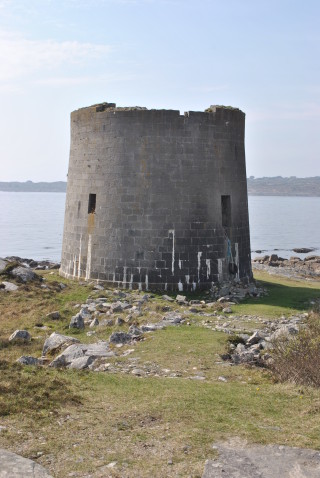 This monument consists of a well preserved Martello tower constructed on a rock outcrop overlooking Cashla Bay near Rossaveel. It was constructed on an elliptical plan. Towers such as this were constructed by the British Ordnance mainly on coastal locations as a measure to stop a possible French invasion of Ireland by Napoleon’s army. To complement the suite of coastal fortifications a number of inland fortifications and batteries were constructed on the Shannon. Among these inland fortifications, two inland Martellos were also built, one on an island in the Shannon at Meelick and the other in Esker townland near Banagher. The Cashla example was originally fitted with a 24-pound cannon. A well preserved military road provides access across the raised bog to the tower. The estimated cost of construction was £3,115-9-6, with additional costs for the road etc of £1,253-7-10 (J.H. McEnery 2016 Fortress Ireland, p.106 Wordwell, Bray).